Tatanka, the Dakota word for buffalo became the name i gave to my black stallion. He was a gift from my Father, who bought him with his Dakota friend on a road trip through New Mexico. It was such a nice present from my Dad, who travelled a lot, so, I came to really treasure and love, Tatanka. We would ride thru the hills and valleys of the mountains near my homeland. Many days of seemingly floating over time and space. I would sail about flying above this world, with my native blood soaring in the winds. I did withdraw from much of my social relationships and went to the natural world, absorbing and enjoying living my personal fantasy story. The unknown being, the hunter who fed many with much game, rider of the finest horses, we would dance over the red earth, dust in our faces, we really became one out there, galloping free. Then it came time to attending boarding school, far away and for during whole school years of time. But, I had weekends and occasionally holiday time, spent with Tatanka. My Father was a medicine man, I was the designated one, to take over his altar and practice. Such a great honor and responsibility, but i was reluctant to assume this duty, time away, allowed me time not to contemplate this task. It was my destiny and after a long absence to get my degree, it just didn’t allow for time with Tatanka. After graduation and my return, my Mother informed me that Tatanka had ran away, quite awhile ago, he was running wild. Rumor had it, he was blind, that numerous people had seen him, in the middle of wild mustang herd, where he didn’t need to see and they took care of him. Immediately, I went out to search and found him. In a remote canyon deep in the mountains, where the cold comes before the sun leaves, I heard him, he knew it was me, the way he always greeted me, a song of welcome, like great big dog.
So, dirty and tired looking, he let me ride him, it was like he told the mustangs to not bother us, I rode him home.
Where he stayed for a few months, then a week before i was to start a job in a distant city up north, he left in the middle of the night, during my Fathers’ going away ceremony for me. I did not go look for him, for I understood, he left, because, it his time to go on alone. He was such a great gift that my Father got for me. I am the medicine man now and the black horse is in the middle of my altar. 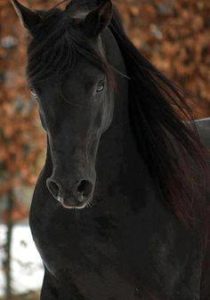